Taking the Boardroom to the Metaverse Battlefield

Designing Your Own Corporate Staff Ride

The History of the Staff Ride

The Corporate Staff Ride is based on the century-old military training tool pioneered by the German General Staff and now used in militaries and civilian organizations world-wide. Focused on the role of the Civil War corps/division commander - particularly appropriate for today's senior manager - our Corporate Staff Ride integrates the battlefield decisions and outcomes with the attendees' main training goals through an "in the field" case method approach. It requires no specialized knowledge - or even interest - in military affairs, only the acceptance that battles can provide useful "metaphors" for decision making under crisis conditions. As an experiential training environment, the actual ground where great conflicts took place has an immediacy and impact that is hard to duplicate in any other forum and offers intangible benefits vital to any organization. 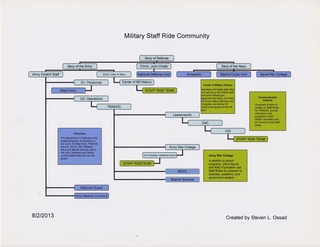 Design Your Own Corporate Staff Ride

The Corporate Staff Ride is flexible, adaptable, and repeatable. Virtually any organization can structure its own Corporate Staff Ride to 1) focus training resources on improving the performance of a functional unit of the enterprise, 2) invest in leadership development at a specific management level, and 3) explore persistent, or strategic, enterprise-wide leadership issues.

This is accomplished through selection of a battlefield site appropriate to the purpose of the Corporate Staff Ride, the choice and order of the particular stops - including varying the stops on a previously visited battlefield - and the selection of the topics considered in the business case study workshops.

With a reasonable amount of research and internal staff work - and advice from APPLIED BATTLEFIELD CONCEPTS LLC - most organziations can integrate the Corporate Staff Ride into existing executive management training and development programs.

The cost of a developing and implementing a customized APPLIED BATTLEFIELD CONCEPTS LLC Corporate Staff Ride is $25,000-$50,000 plus expenses and takes 3-months to implement.

APPLIED BATTLEFIELD CONCEPTS LLC conducts an intensive, experiential learning-based, leadership and team-building exercise at Antietam National Battlefield, the site of the "bloodiest day" in American history. Utilizing a broad array of resources from the Official Reports, archives and attics, the Antietam Corporate Staff Ride takes the perspective of the Civil War corps-level commander during the one-day struggle between Lee's Army of Northern Virginia and George McClellan's Army of the Potomac.

The Saratoga Staff Ride is a leadership training exercise based on the 1777 Battles of Saratoga. Universally considered the crucial strategic victory of the Revolution, this encounter pits the vainglorious and talented British General "Gentleman Johnny" Burgoyne against the flagrantly ambitious, and vain, American Gen. Horatio Gates, a would-be rival to George Washington. Saratoga was a major operational victory, as well as a tactical triumph of engineering, special units, and displaying a rich weave of great staff work, legendary leadership examples, and succesful crisis decision-making. While providing the irresistible event that moved the French to support the rebel government, Gates had succesfully defended Albany and the vital Hudson River and contributed significantly to the morale and fighting reputation of the Continental Army. Saratoga is a great experiential-learning investment for C-Suite level-executives on a short-duration team building retreat.