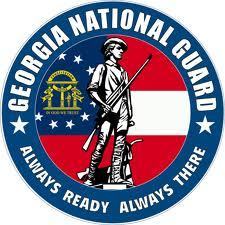 The day included visiting famous battle sites and several members giving briefings. Some of the briefings covered generals of the battles, battles that led up to Chickamauga, and some of the weapons systems used.

The battle of Chickamauga was the bloodiest in the Western Theater of the Civil War, with nearly 35,000 total casualties. It took place on the morning of September 20, 1863.

124th MPAD Commander Maj. John Alderman took his unit up to an observation point that overlooked the Lookout Mountain. He briefly explained how General Rosecrans led his men from Nashville all the way to Chattanooga through the rough terrain and discussed what problems the terrain caused Soldiers during that time. He also explained how staff rides are a great way to develop leaders.

“Professional development is the responsibility of leaders. It’s also the responsibility of individuals. It’s something we don’t get to do enough of especially in the National Guard where time is so short,” Alderman said. “A staff ride is a great way to build leaders in the unit and to help them get a better understanding of the things that go into a battle plan.”

The day also included a visit to the site’s museum and a cannon demonstration by some of the local volunteers that were dressed up as Confederate Soldiers. Sergeant Gerardo Deavila, who is a public affairs journalist in the unit, gave a brief on the weapons systems, including the artillery fire power, used in the battle.

In the afternoon, the MPAD Soldiers walked the same trail that General Longstreet led his troops down 149 years ago to attack the Union Army. The battlefield sites were a great way for the Soldiers to get a visual aspect of the war and to see how far the U.S. Military has come in practices of war, uniforms, and medical aid as NCOs briefed aspects of the battle along the way.

The final stop on the staff ride was at Snodgrass Hill, where the unit’s executive officer Capt. Vernon Robinson showed the Soldiers the “blueprint of the battle plans” by using sticks and rocks on the ground – a practice in the Army referred to as using the “sand table”.

Overall, the unit learned a great deal about leaders from both sides of the battlefield. The Battle of Chickamauga was one of the key battles in the Civil War that delayed the Union’s advancement on Georgia. Later, the Union would eventually go through Georgia and declare victory with the surrendering of General Robert E. Lee in 1865.

“We’ve all heard – at one time or another – that ‘those who ignore history, tend to repeat it,’” 1st Sgt. John Kinnaman said. “Through events such as the staff ride, we as Soldiers, hopefully, see what was done right and what was done wrong based on the day’s logistics, tactics and technology and learn to do it better.”