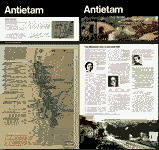 When I was on Wall Street and a disaster occurred, analysts were expected to be ready at 4:30 AM to comment on the effects on companies, earnings, outlook, brand, etc.

The Corporate Staff Ride business is largely dependent on the National Park Service, for its guides, logistics support, materials and especially its well preserved, safe, and totally accessible battlefields, monuments, historic sites, etc. Actual recreational visits and forecasts for the top five such locations are listed in Table One below.

The shutdown not only represented an immediate loss of revenue, it highlights an on-going, though manageable, risk that strengthens the argument for an “augmented reality” strategy that reduces or eliminates the dependence on an actual site visit for the heart of the Staff Ride experience. The cost and "softer" pressures during peak periods of budgetary crisis have led to cancelations, consolidations, last-minute staff ride redesigns and program cancellations. The pressure is greatest on those locations which are the most developed for staff rides, especially expensive, popular tourist destinations like Gettysburg.

The shutdown also strengthens the case for Staff Rides at smaller, closer, less traveled sites where the staff ride can be proprietary and designed to address specific corporate problems, thus increasing the likelihood that the practical leadership “lessons” taken from the Battlefield and the Boardroom are more focused and specific, rather than a general catalogue of leadership "virtues" taken out of a history book.

• The shutdown hit the largest and “anniversary” sites the hardest – Gettysburg, Chickamauga, esp. when such sites have limited alternate tourist attractions

• During the budget crisis, Leavenworth’s Combat Studies Institute (CSI) released a new publication in their series: The Blackhawk War Staff Ride as well as a new Afghanistan War study of Battalion-level combat, available as an iPad application

• On the day the shutdown ended, 100 Penn State Alums visited Antietam as part of their outreach program