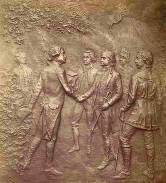 Comprehensive research guide for the Battle of Yorktown Staff Ride.

Bibliographies and Maps
• Yorktown Siege Map from USMA History Department
• Yorktown Maps
Digitized Maps from the Library of Congress, Rochambeau Collection, of Yorktown in the Revolutionary War era.
• A battlefield atlas of the American Revolution / by Craig Symonds ; cartography by William J. Clipson.
• "Some Old Yorktown Maps"
Trimble, K. W. Military Engineer, 23 (September-October 1931), pp. 439-443.
See reference librarian for assistance.
• War for Independence in the South, 1778-1781
• Revolutionary America, 1763-1789 : a bibliography
Washington : Library of Congress : for sale by the Supt. of Docs., U.S. G.P.O., 1984.
• The War of American Independence, Select Bibliography, Operations: Virginia Theater
Library of the Marine Corps does not hold all the items relating to Yorktown listed in this bibliography. See reference librarian for assistance.

Each of the following are copies of correspondence and journals written in the time period surrounding the Yorktown Battle.
• St. George Tucker's Journal of the Siege of Yorktown, 1781
• Correspondence of General Washington and Comte de Grasse, 1781, August 17-November 4.
• The Graves papers and other documents relating to the naval operations of the Yorktown campaign, July to October, 1781.
• Journal of the siege of York-town : unpublished journal of the siege of York-town in 1781 operated by the General staff of the French army
• The journal of Lieut. William Feltman, of the First Pennsylvania Regiment, from May 26, 1781 to April 25, 1782, embracing the Siege of Yorktown and the Southern campaign [microform] See reference librarian for assistance.
• When the French were here; a narrative of the sojourn of the French forces in America, and their contribution to the Yorktown campaign...